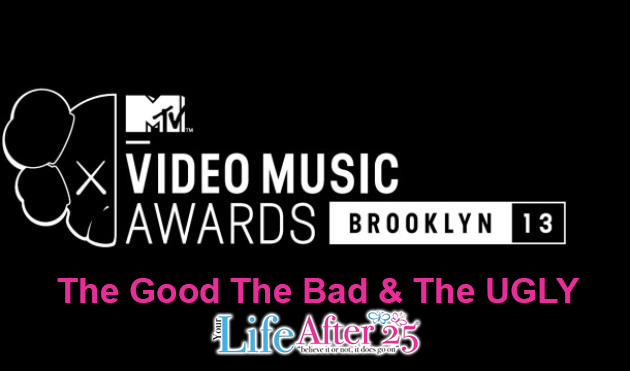 Well… MTV has done it again… truly put together a show that left me speechless throughout the night. Sometimes for good things and sometimes for bad. Lady Gaga definitely opened the show in a Broadwayesque manner, she changed outfits and wigs about 30 times, it was a good start to the show. The highlights of the night were supposed to be about @NSYNC having a reunion, and yes after one out of breather song performance I was STOKED but left wanting more, however aside from that Justin Timberlake absolutely OWNED his solo performance. Danity Kane didn’t perform 🙁 but apparently they have a new single called Rage coming soon. Other than that Bruno Mars sang quite nicely, Macklemore also had a great performance with a surprise of Jennifer Hudson joining them.

I would say overall the show was downhillish after Justin performed… The lack of a host didn’t help and Kevin Hart’s jokes were terrible.

Miley Cyrus oh Miley, what can one say… I truly feel like that girl is a walking cry for help. What I can’t really understand is how “Twerkin” became the thing to promote that our kids follow? I personally wish the Rachet/Twerk movement would go away. Her performance was one large ball of raunchiness and off pitchness… Sadly they had Robin Thicke get caught up in the mess too.

Here’s Miley Cyrus’ Performance if you missed it

and here’s how Will Smith’s family reacted, lol

yyyoo look at Will Smith's family reaction to Miley!! pic.twitter.com/GlO320EmDB

In the end @MTV isn’t really made for #YourLifeAfter25 anyway, so it was good for what it was worth.

Moments from the Red Carpet…

Lady Gaga has costume changes during "Applause" â€” and here's what she wore on the red carpet. http://t.co/u1MDbyy0dw pic.twitter.com/9DS3ZMMJqG

.@DanityKane is back, and dropping a new single called #Rage very soon! RT if you're excited! #VMA2013 pic.twitter.com/J0coZ3iiiN

What were your thoughts on the show?

The 2012 @BETAWARDS & Behind The Curtain Live Stream, Tell Us Who You LOVE On The Red Carpet #BETAwards