After a 0-3 start this season it was starting to look like this year was a bust for Fantasy Football, but after making the right moves and putting focus on the defense because we could not get any better on offense unless someone drop a player that we could steal. We finished the regular season with the highest point total we have put up this year with 386 points, second in our division and we have the third best record at 8-5.

Now it’s time for the playoffs and the first game looks to be a close one. We a are playing team Mic Geronimo with whom we split two games with them this year but each time we played one of use had our best players on a bye week. So now we get to go head to head with are best players in the game in a win are go home playoff game. Wish us luck!

So in week 12 Josh Gordon of the Cleveland Browns had a big game with 237 yards and 1 touchdown and 72 points. Which gave him the player of the game. In week 13 he comes back with a even bigger game with 261 yards and 2 touchdowns with 98 points and a NFL record of being the only player to put 2 games back to back with 200 or more yards. Which makes him the player of the week for the second time in a row.

I was going to give the Patriots defense the zero of the week for making us lose points with -4. But I’m going to give it to a guy that didn’t even play this week. He was a healthy scratch this week and didn’t even dress up for the game all due his fumble issues. I think I even seen him drop the ball on the side line walking to get some water. So for the second week in a row the zero of the week goes to Stevan Ridley of the New England Patriots. Come on Ridley I need you back.

Fantasy Football Start ’em, Sit ’em – Week 14 by BNQT.com
Can't get enough of Your Life After 25? Keep up with latest posts & events by subscribing to our newsletter, and never miss a thing!
Previous Story 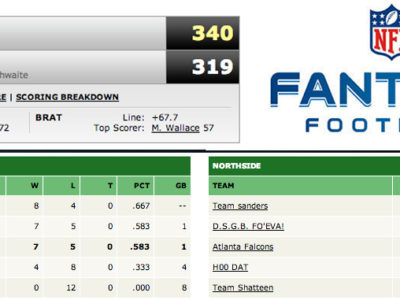