Crowdsourced Cabernet – The People’s Choice, Where Wine Gets Really Social!

This post brought to you by Columbia Crest Winery. The content and opinions expressed below are that of Your Life After 25.

I love wine, and have recently gotten my husband into it.  Which is a great thing because we can now enjoy a glass or two together on date nights. Although, I’m more of a white wine person and we tend to lean toward sweet whites, when I was given the chance to be among the first to try the first ever crowdsourced wine from vine to bottle – the 2014 Crowdsourced Cabernet Sauvignon Vintage – I was excited to give something new and different a try.

The Crowdsourced Cabernet was recently released on June 3rd from Columbia Crest, a winery in Washington state, which offers perfect grape-growing conditions. In 2009, their 2005 Reserve Cabernet Sauvignon earned them the honor of being the first Washington winery to have a wine named Wine Spectators #1 Wine in the World. 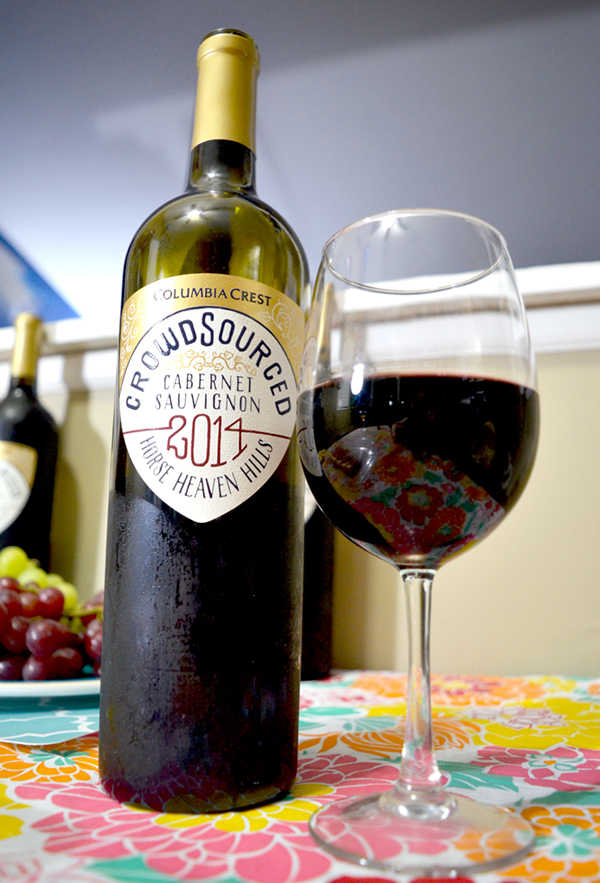 Columbia Crest began a journey to become the first winery to crowdsource a wine from vineyard to table in 2014. What that means is that everything involved in creating the wine, from bud break, to harvest, to the final blend, right down to the label on the bottle, was voted on by an online community of wine lovers. The process took 18 months and resulted in a product that is truly the people’s wine.

Living in a social era, I think it’s amazing that projects and brands like this are even able to exist. I know all of the online fans that voted will feel a sense of pride in knowing that they were a part of something big, together! That was one of the things that intrigued me when I had the opportunity to try out Crowdsourced Cabernet.

We were given the opportunity to try the Crowdsourced Cabernet and host a wine tasting party featuring it. I tasked my husband with picking up some foods to pair with the wine, and he took to the Internet to do some research on pairings that would work. We’ve learned a few things and got a chance to have a great night in with friends! 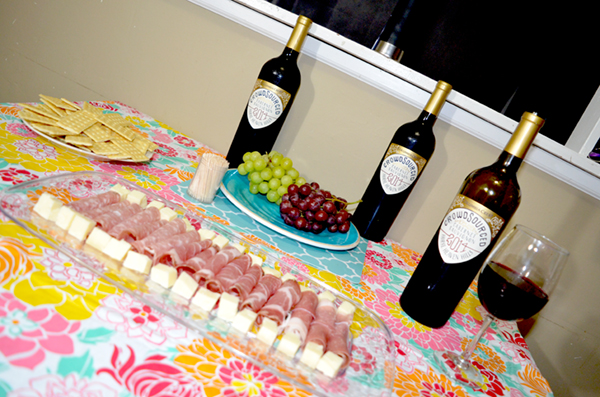 We decided to have a nighttime wine tasting, after our kids went to bed. The hubs came home with some fancy cheese and meats, grapes, crackers, and even strawberries, which I forgot about and we didn’t pull out! In true fashion of our home, we ended up snacking and drinking the Crowdsourced Cabernet with a few of our friends in the living room with a movie. It was great just being able to have relaxed adult time. 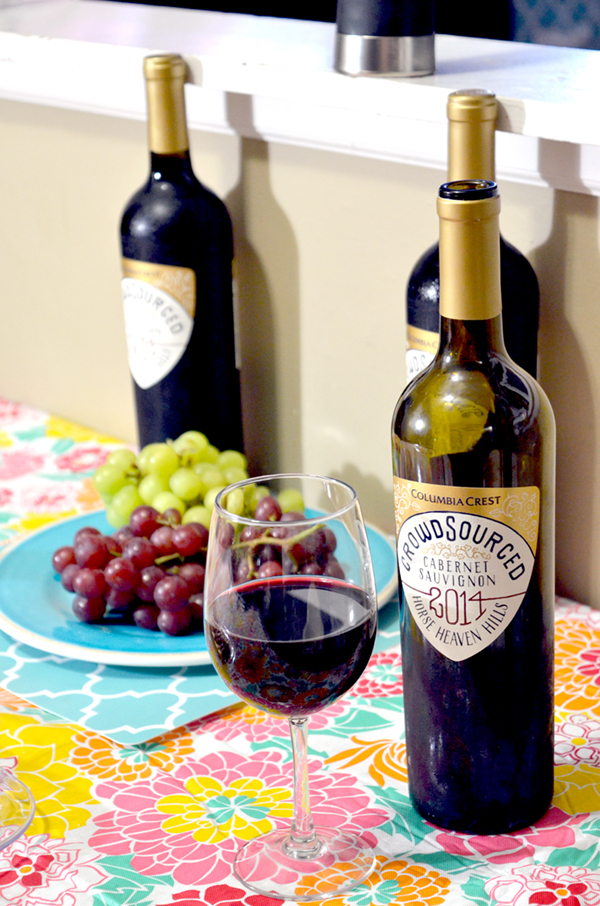 At one point my husband even decided he would like to try steak with the wine, so he pulled one out, seasoned it up, and cooked it. Random steak and wine improv! I didn’t try the pairing, but was told it was delicious (and I wish I had gotten a picture because they looked beautiful together).

As I’m not a big cheese and meats type of person, I snacked more on the crackers and grapes, but the cheese and meats paired with the Crowdsourced Cabernet was a huge hit. Personally, when I do drink a red, I’m a big fan of trying it with chocolate – self professed chocoholic! So after the party I decided to wind down with a glass I had snuck away for myself for later, a few pieces of chocolate, and a good book. 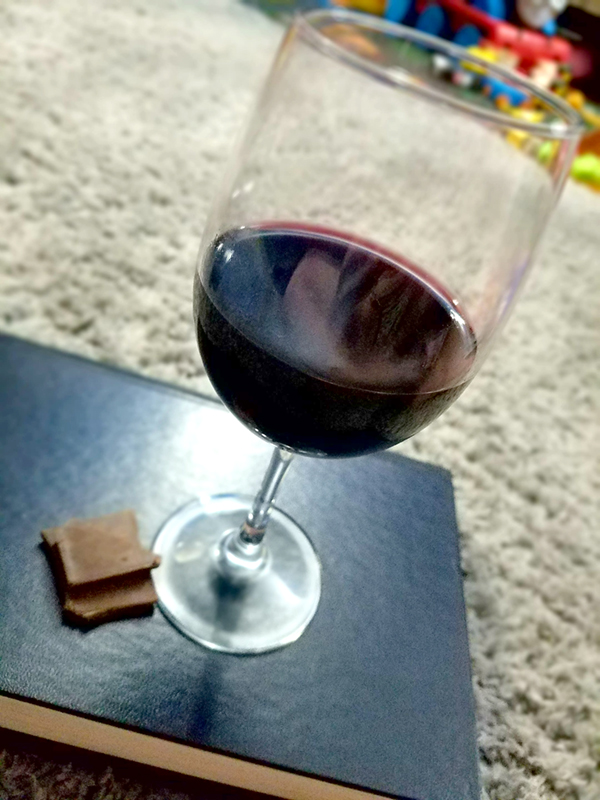 Since I’m just a casual wine drinker and I don’t know a whole lot of the terminology when it comes to tastings, I’m going to allow the Head Winemaker at Columbia Crest Winery, Juan Muñoz-Oca’s words describe the flavor profile of the Crowdsourced Cabernet.

The 2014 Crowdsourced Cabernet is definitively a Columbia Crest wine, yet a new take on our terroir based on the crowd’s decisions. To me, it’s a balance of ‘old world’ sensitivities with ‘new world’ fruit.”

About 1000 cases of the 2014 Crowdsourced Cabernet was made available for purchase at $30 per bottle, and is exclusively online and in the Columbia Crest tasting room. 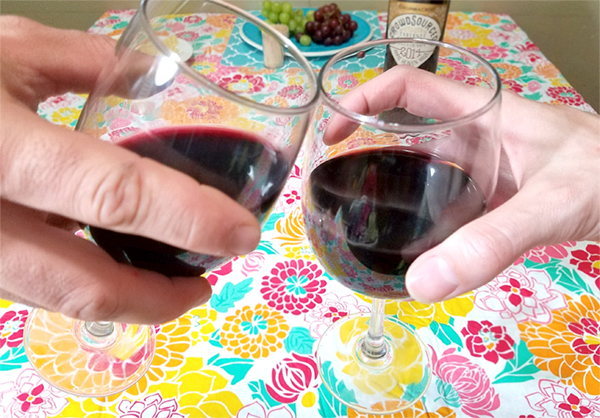 If you’re a wine lover or are looking for a gift for wine lovers in your life Crowdsourced Cabernet is the perfect way to go. Be a part of a vision and journey that had been a dream come true!

Be sure to spread the love about Crowdsourced Cabernet! 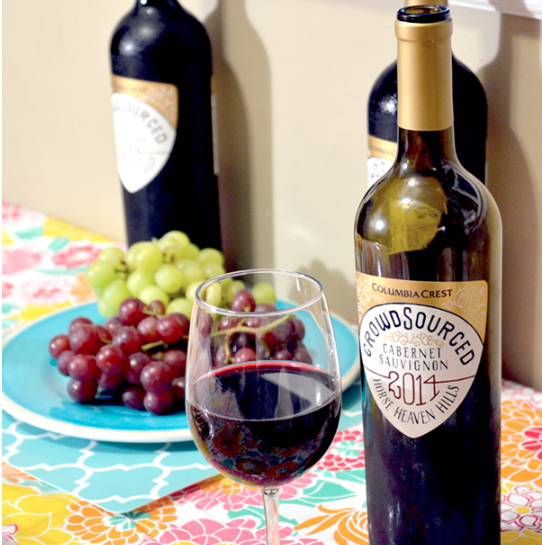 Experiencing The Atlanta Food & Wine Festival With Lexus in Vineyard In The City! 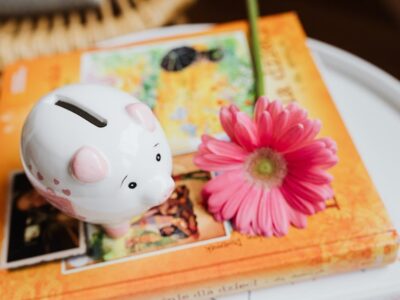 5 Of The Best Ways To Save For The Future 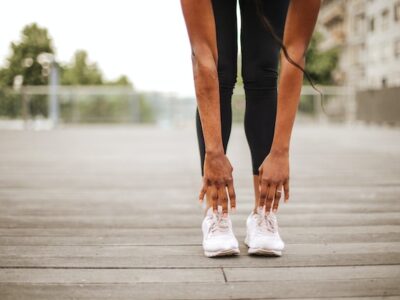 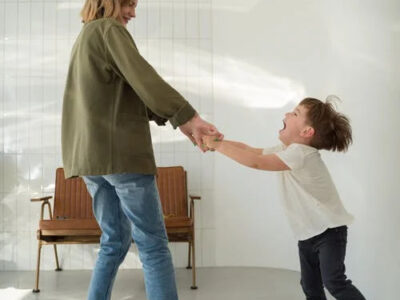 Normal Behavior For Woman Over 25