Celebrating Independence Day with a Bang

Making love during a fireworks display only adds to the excitement! You and your partner can work with the rhythm of the loud bangs, and the bright lights from the fireworks provide added ambience. But can you last until the grand finale? With the average length of intercourse clocking in 2.7 minutes less than a short fireworks display, you may need some help crossing the finish line. If you or a partner struggle with lighting things off early, medication for premature ejaculation can help the show last longer.

Sneak Away for a Quickie

Sometimes you want things to last longer, but a quick afternoon delight doesn’t hurt either. Sneaking away from the barbecue for a few minutes to fit in a quick session can be thrilling and sexy. Unsurprisingly, if you’re having a “quickie,” you’ll want to be fast! Make sure that you get right down to business. That means removing minimal clothing, choosing an easy position, and not being fully committed to orgasm. It’s a bonus if you both do, but not a necessity for either party during a quickie. You can speed things along and be prepared right from the start by carrying travel size lube on your person — there’s no time for foreplay here!

People love to have sex outside. It could be the good weather, or the risk of getting caught — either way, it’s extremely popular. Even more Americans (77%) have had sex outside than on Independence Day, but that’s not stopping them from doubling up. 1 in 5 people have actually used the 4th of July as their occasion to quite literally roll in the hay. However, they are doing so at their own risk. Public sex may be punishable by law! Keep in mind, some of the most popular locations to have sex in public include parks, beaches, and pools — so be on the lookout! 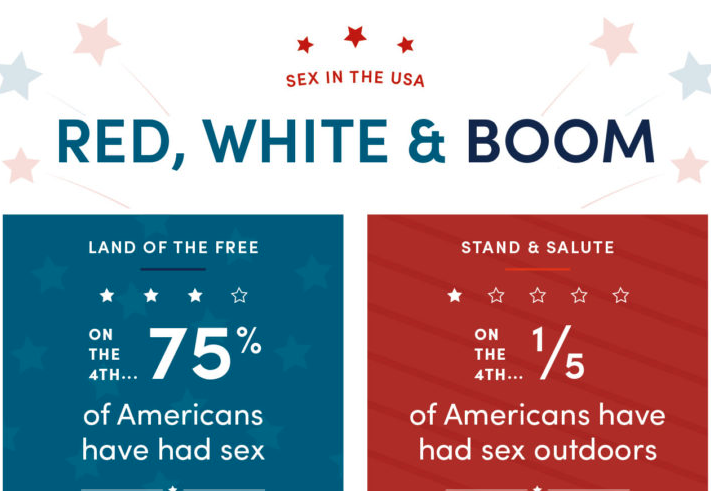 Why Flowers Are Still The Best Gift?

What is the science behind wearing a bra?