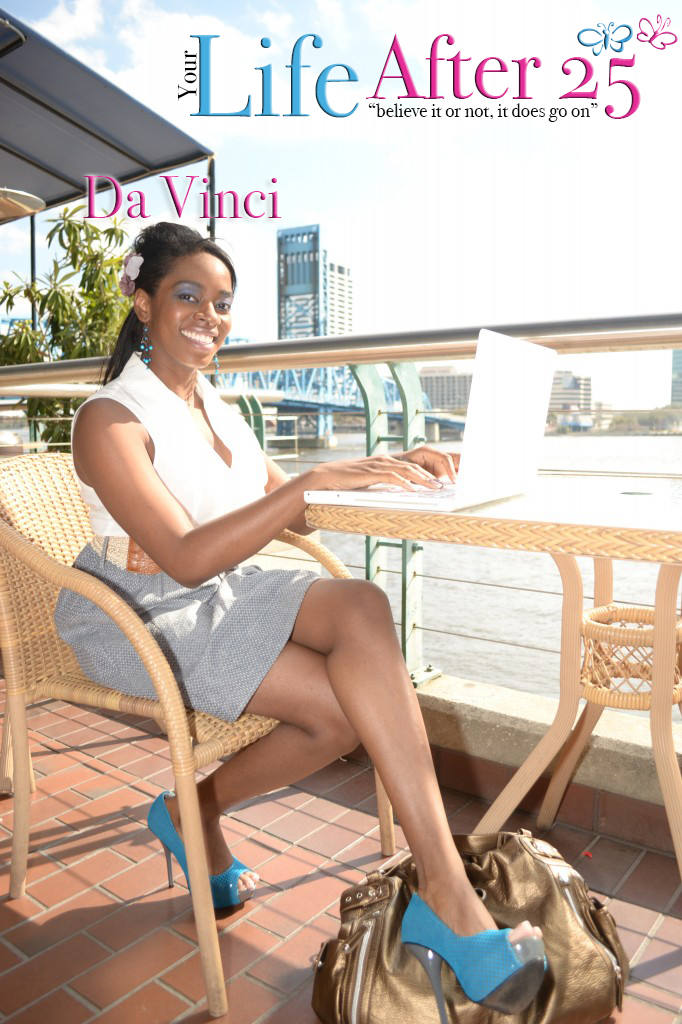 Embodied by Leonardo Da Vinci’s positive qualities; innovation, intelligence, and free thinking, this half Nigerian and Ghanaian woman was born in London, England yet raised in Atlanta, Georgia and has come to be known as Da Vinci; a nickname given by her older sister. “Choose your life.” quoting Da Vinci, is a passage that sets forth her destiny.

Growing up, Da Vinci’s Uncle always encouraged her creative mind and academic excellence, her mother supported the entrepreneurial mindset and entrusted faith that carried her through the good and bad times in life; Da Vinci says, I’m not ashamed to admit my mistakes and trials because they are the experiences that have shaped the woman I am, surviving a suicide attempt that put me in a coma at 14, surviving rape at 18, having a lumpectomy due to a rapidly growing tumor at 19 are trials that also make it easy for me to connect with people.

And it is that drive that has become the basis for her blog – YourLifeAfter25.com (YLA25.com), a lifestyle and women’s blogazine that will Entertain – Educate – Empower and according to the mission assist women to get rid of the old expectations of who you should be by the age of 25 and celebrate who you will be after 25. Your Life After 25 is about living life to the fullest when society makes one think and feel like it’s all down hill from there. Your Life After 25 speaks on many topics from women’s Issues, relationships, fashion, branding, women in business, to causes like rape/domestic violence and suicide prevention awareness.

Da Vinci attended Google University, a never-ending student of life she excitedly declares and not a woman who only says she wants to help women and people, Da Vinci is one that takes action. Da Vinci first started a website, LadyEpiphany.com, at the age of 16. Lady Epiphany was the blueprint and starting point for the evolution of the Your Life After 25 in how to reach women globally.

Da Vinci has been a featured blogger for Blogads and knows this is simply the beginning of her passion guiding her towards her purpose in life. For now Da Vinci and co-owner Dante Trimble are working on events and launching YLA 25 Radio later this year. Motivated, compassionate, eclectic, creative, free spirited, all describe Da Vinci beyond the personification of Leonardo, Da Vinci has carved out her own position as a Realistic Optimist, and modern day Renaissance woman.

To help you throw out the old expectations of who you should be by 25 & celebrating who you will be after 25. Your Life After 25 is all about living life to the fullest when society makes you think and feel like it’s all down hill from there. “Believe It Or Not It Does Go On”.

Want To Write For Us? Click Here
Copyright 2020 Your Life After 25. All Rights Reserved. Brought to you by Trimble & Ajayi, LLC.
Copy link
CopyCopied
Powered by Social Snap